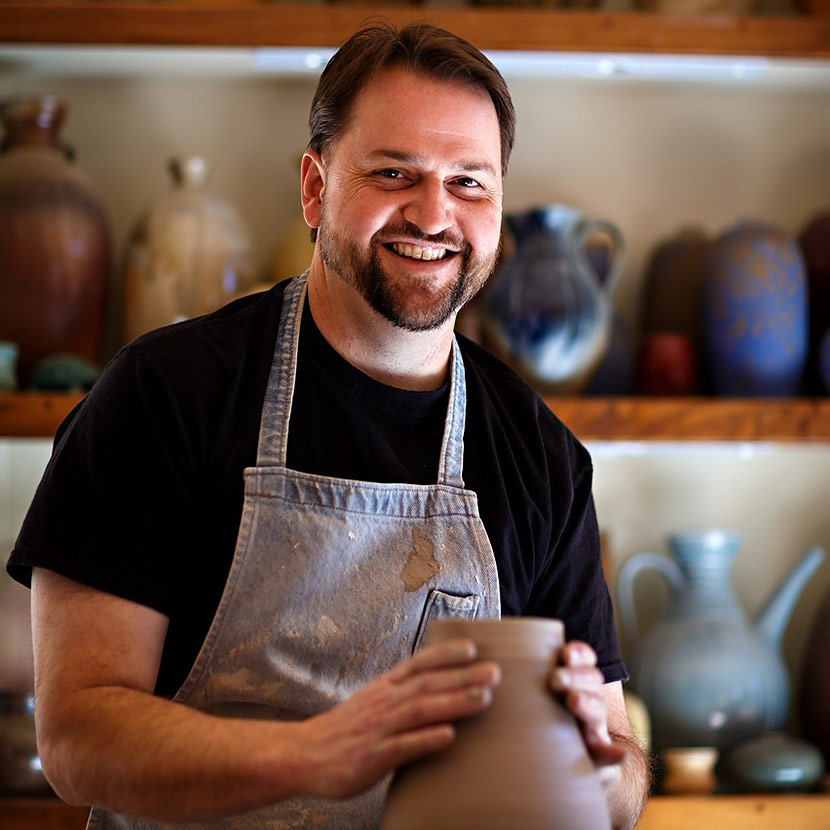 The weekend of May 15 just keeps getting better for art lovers! During Artsplosure – The Raleigh Arts Festival, NC Potter Ben Owen, III will be at the Nature Exploration Center on May 15.

Join us for a special evening featuring NC Potter Ben Owen, III, to celebrate the opening of our newest special exhibition, Dig it! The Secrets of Soil.

Enjoy a live pottery demonstration as Owen makes pots on a traditional kick wheel from 6 p.m. – 6:45 p.m. and 8 p.m. – 8:45 p.m. He will the present Roots in Clay at 7 p.m. in the WRAL 3D Theater. Learn how form and utilitarian qualities of pottery influence common styles for works of the Owens and other families in the eastern United States. See how pottery is crafted on the wheel, glazing techniques and firing processes, as well as the influence of natural resources in North Carolina. Join the discussion on the importance of preserving traditions in clay and how to encourage continued interest in this art and craft media for future generations.

Be the first to explore Dig it! The Secrets of Soil from 5 p.m. – 7 p.m. The exhibition reveals the complex world of soil and how this underfoot ecosystem supports nearly every form of life on Earth. Developed in conjunction with the Soil Science Society of America and Smithsonian’s National Museum of Natural History, this exhibition includes interactive displays, hands-on models and 54 soil monoliths representing each U.S. state, territory and Washington, D.C. Exclusive bonus elements highlight North Carolina agriculture, pottery and research projects from our Museum.

Visit the Museum Store to see Owen’s exhibit of work, Earth, Water & Fire: Works in Clay. The exhibit and sale continue through the month of May. The Museum Store and the Special Exhibit Store will be open from 5 p.m. – 7 p.m. on this evening.

Tickets are $15, $10 for members. Space is limited. Reserve your tickets online or purchase them from the Museum Box Office. Get tickets!

About the Speaker
Ben Owen III is an American studio potter working in Seagrove, North Carolina. Born into a traditional pottery family, he was first introduced to clay by his grandfather when he was eight years old.

Owen has exhibited his work continually since 1993 in both group and solo shows in North Carolina at the Mint Museum, Charlotte; Blue Spiral Gallery, Asheville; Cameron Art Museum, Wilmington; North Carolina Art and History Museums, Raleigh; Gallery of Art and Design, NCSU, Raleigh; and Art Museums in Hickory, Greenville and Fayetteville and of course, the North Carolina Pottery Center, Seagrove. Venues outside our state include the Chrysler Museum, Norfolk; Alfred University, New York; the Berman Gallery, Atlanta; and in Tokoname, Japan. His work has been collected by several museums including the Boston Museum of Fine Arts and the Dallas Museum of Art. He has received numerous awards including North Carolina Living Treasure in 2004 and has been featured on “Good Morning America,” PBS, Japan-TV, Korean-TV and several TV shows in China.