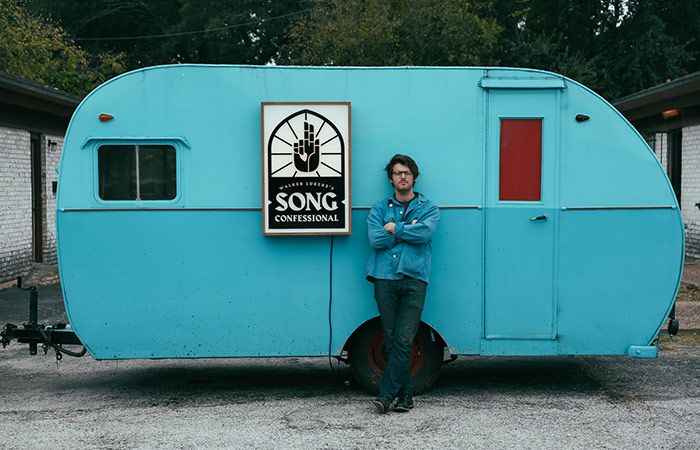 This fall, we’re thrilled to welcome the Song Confessional to downtown Raleigh for the return of Artsplosure – The Raleigh Arts Festival.

We sat down with Song Confessional co-creator Walker Lukens to learn more about the origin of the project, how it works, and what to expect in this one-of-a-kind, rock and roll-inspired confession booth.

Get ready to step into the Song Confessional and leave your own anonymous confession at this year’s Artsplosure festival. Find it on Fayetteville Street all weekend long on October 9-10, 2021!

A: Tell us about yourself – how did you get started in the music industry?
W: I started making music when I was a teenager. My older brother played music and my mom studied music in college, so there were a lot of instruments laying around the house. From there, there was sort of nothing to do as a teenager except throw shows at the local community center. I grew up in Houston which is a really huge, spread out city. There were little pockets of teenagers with the same idea as me all over. I started getting into music then and I still am connected with people I’ve played shows with when I was 16 and 17.

A: What instruments do you play?
W: I play a lot of things at a mediocre level. I mainly sing and play keyboards and guitar.

A: Where did you get the idea or inspiration for the Song Confessional?
W: Me and Zac, who I do this project with, were on tour behind the record called “Tell It to The Judge.” Basically for three years we were playing the same songs night in and night out more or less. It was super repetitive. So we started talking and dreaming about doing a one-off thing for SXSW, like a crazy activation event and something new. A woman came up to me after one of our shows and she said, “Hey, I just wanted you to know that this album of yours really helped me get through losing my mother.” It was a really beautiful, touching thing to hear because I was really tired of playing this music. Basically I had this thought of, “What would it be like to write a song for this woman about losing her mom and she tells me exactly what inspires the song?” So all of this is flying around and then we decide to do this event at SXSW where people can come and tell a story and then bands turn the story into a song.

A: When did it all start / how old is this concept?
W: We did that event in 2018. And from there it’s snowballed into what it is now.

A: How does the Song Confessional experience work?
W: At Artsplosure, we’ll have somebody outside the trailer explaining what this project is and then if there’s no one in there, you can go in and give a confession. If someone’s in there, we’ll get your phone number and text you when it’s free. We have a whole partition, it’s like a real Catholic confession. You can talk to your rock and roll priest.

A: Do you give people prompts to get stories out of them? How do you guide folks through the storytelling process?
W: Most people have an idea of what they want to tell. Normally people tend to tell their “best story” – the thing they share at a cocktail party or something. Other people come in and are super vulnerable and tell us really heart-wrenching personal stuff, too. We’re usually just there to make sure we understand. We may ask a clarifying question or ask for more information about a particular thing. I’ve found that the project works the best when somebody sees it, hears about it, and the thing they think about is what they want to tell. 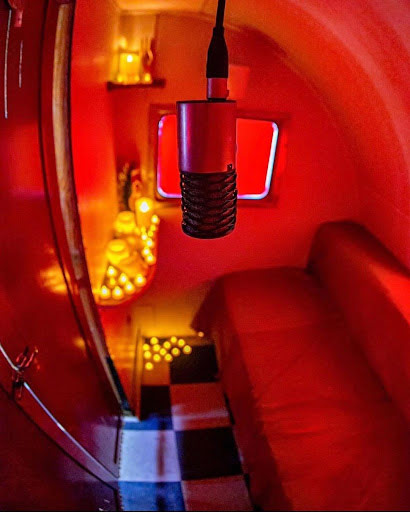 Some people turn it into a real hour long therapy session. A full 50 minutes or so. The truth is, sometimes it’s a real privilege to have somebody open up to you. If people really do have something to share, that’s incredibly powerful. It just feels like an incredible privilege to have a stranger tell you stuff. Seeing as we’re not Catholic priests, we’re not judging them. It’s something I take for granted a lot. I don’t necessarily have a lot of guilt or shame about things that I’ve done in my life, but other people do. And they don’t have a way to share it. When you get the feeling that you are that for somebody, in a small, brief way, it’s a really nice thing to be a part of.

But most people take between 10 and 20 minutes and in those cases they usually tell us a story, we ask a few questions, and that’s it.

A: Do people change the names of the people in their stories so it stays anonymous?
W: It’s anonymous to the songwriters we give the stories to. If you’re going to get into the booth to tell a story, we get your email address so we can send you the song if we create it. Whoever is in the booth taking your confession won’t know who you are at the time. Basically when we give the confession to the songwriter, it’s totally anonymous to the songwriter. They have no idea who you are. If we turn your confession into a song, we’ll definitely let you know. If history is any indicator, it will probably become your favorite song.

A: What is one of the craziest confessions you’ve ever heard?
W: The band is called Husky Loops and the song is called Who Did You Call. This is a podcast episode. Basically the confession was, this guy is home for Christmas break from college and he’s hanging out with his best friend for the first time in a while. And his best friend is like “Man, I have to tell you something, it’s really serious, do you promise you won’t tell anybody?” He’s like “Of course man, you can tell me anything.” And so his friend starts telling him that he’s been torturing small animals in the woods behind their town. And what the guy realizes is “oh my god, my friend’s a psychopath.” And he’s putting together all these different memories from their childhood where he was aggressive or angry. And he thought wow, this guy’s a psychopath. This is how serial killers start. And so he keeps walking with his friend and basically comforting him because his friend just realized that there’s something wrong with him. So they finish hanging out and he immediately goes to the cops and says “Hey, my friend just confessed to torturing small animals, I’m worried about him.” He tells the cops I think he’s going to do something really dangerous to somebody. The cops said they couldn’t really do anything since he hasn’t done anything wrong yet but they’d keep an eye on him. The cops end up doing a wellness check on this guy. And he realizes that his friend immediately went to the cops and told on him. It immediately severs their friendship and the guy starts badmouthing him all over town. Not to mention the guy’s just terrified because this guy is now angry with him. So he tells this confession to us and the band we gave this confession to is from Italy. And the song is awesome. But the band thought it was crazy that his first reaction was to go to the cops. They said in Italy they would take him to the hospital for a mental health check. So in the podcast we end up talking about how we just live in a more violent society here and we don’t have universal healthcare. It ended up being a really interesting discussion.

On the podcast you’ll hear the confession, you hear the song it inspired, and you hear an interview with the songwriter.

A: How do you find the bands & musicians to record the songs?
W: A lot of different ways. We went to Newport Folk Festival and got this incredible confession. Basically when this woman was in high school, she went to a party with some friends and guys from another school. All of a sudden this one guy was like “Hey, can I talk to you alone?” She thought it was weird because she didn’t think they were flirting. Basically they’re sitting there and he said “We’re related. I’m your brother.” She discovers she has a long lost brother. It’s very crazy. They have the same dad. Before her parents got together, her dad was with someone else. With that one we gave the confessions to bands that had been to Newport Folk Festival before. In pre-COVID times, bands would come on tour to Austin and we’d get them to schedule a day off and do it here. Nowadays, we do some remotely. Lots of different ways.

A: How long does it take for a confession to be turned into a song?
W: Usually if we’re doing it in person we only give them a day. It’s kind of part of the challenge to do this in a finite amount of time.

A: Do the bands have any guidelines when creating the song?
W: It’s better the less restrictions they have. We had a confessor come in once and he basically was bragging about dating three women at the same time and them not knowing it. We gave the confession to this band Minihorse, and the guy from Minihorse was like “I can’t empathize with this guy, I hate this dude.” And we were like, yeah write whatever you’re feeling. So that’s what he did. And it’s truly a mean song. So there are no guidelines at all.

A: The songs are available to hear on your podcast, but can they also be streamed on Spotify or Apple Music?
W: Yep. Not all of the songs that are made end up on the podcast, but we always put the songs into a 7-inch record and we send it to the confessor.

A: What’s the furthest the Song Confessional has traveled?
W: The furthest we’ve gone is Rhode Island and California but we’ve gotten confessions remotely from Europe and South America.

A: Awesome. We can’t wait to see you at Artsplosure in a few weeks!
W: We’re stoked. We’re very excited to come.

Meet the judges for Artsplosure – The Raleigh Arts Festival on October 9-10, 2021 in…